Hub LA Shares: Five Lessons from Self-Publishing “How to Give Half Your Work Away for Free”

This is the first installment of a new blog series, “Hub LA Shares.” We’ve asked members to share their expertise on something they’re passionate about professionally or personally. For the first post, verynice‘s founder Matthew Manos shares some of his take-aways from writing and self-publishing a book about verynice’s innovative business model. Matt’s book How to Give Half of Your Work Away For Free, will be available very soon.

Five Lessons from Self-Publishing My Book, “How to Give Half Your Work Away for Free”
By Matthew Manos for HUB LA 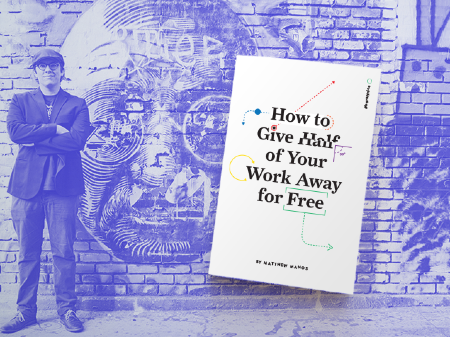 I just finished one of the biggest projects of my career: I wrote a book. It’s called “How to Give Half Your Work Away for Free”, and it is a series of toolkits and essays that open-source verynice’s unique 50% pro-bono business model known as the “double-half” methodology. Aside from the role of an “author,” verynice is also managing the design, marketing, printing, distributing, editing, and selling of the book. The following are a handful of “lessons learned” from undergoing a challenge like this.

1. Talk about your project before you begin fundraising
verynice elected to fundraise for the printing of our book by having a “pre-sale” on indiegogo. The biggest mistake that I have seen businesses and individuals make while kicking off a crowdfunding campaign is that they use it as a launch pad for their product. What we found by actively discussing the content of the book an entire year prior to putting it up for pre-sale on indiegogo was that we immediately had an audience of potential buyers and advocates of what we were doing. People knew that this was coming and, for us, that lack of surprise actually resulted in being able to very quickly reach our funding goal.

2. Think beyond print
Immediately upon reaching our initial goal of $5,000.00, we realized that we needed to think beyond print and use extra funds to do even more than we originally imagined. The reality for many people who are self-publishing is that the opportunity to order an additional batch of books beyond the initial run is actually quite challenging. In our case, we are expecting to actually cap the printed version of the book at just one run of 500-750 copies. As a result, a big question we were confronted with was “how does the book live on beyond print.” Our answer was to create digital versions for various platforms that could be updated and distributed in multiple ways. As a result, we decided that 50% of our budget would go toward print, and 50% would go toward a digital companion.

3. Find like-minded supporters in the media
Beyond our own marketing channels, we took the opportunity to get the content of the book in front of as many people in the media as possible that were like-minded. Luckily, we were featured in a dozen blogs including GOOD and Stanford Social Innovation Review. We even got the book on live television and had a half-dozen speaking engagements. We were so confident in the communities that our media partners have that we even decided to offer the opportunity to have their logo displayed on the back of our printed edition. Doing this showed an equal partnership in which both parties would give and receive. Very often when individuals or businesses approach various media outlets, nothing it offered in return. We learned that offering up something in exchange for press is beneficial.

4. Reward your supporters
There will always be one or two power supporters that are referring dozens of their friends to your product, tweeting and sharing non-stop, or just dropping some kind words of encouragement here and there. These people are SO valuable to the success of your project. Reward them! In our case, we decided to offer the person with the most referrals to our indiegogo page a special edition copy of the book. This resulted in even more engagement and increased our reach by multiples.

5. Keep track of your expenses (even the boring ones)
The biggest mistake I made over the course of self-publishing was under-estimating our budget / potential expenses. The problem I made, which is a common one, was that I was so excited about the website and the book that I forgot to keep track of the “boring expenses.” These are expenses like taxes, shipping, and hosting. Don’t forget those boring ones! They’ll come back to bite you…

Want some more of Matt’s wisdom? Be sure not to miss his video for the Hub LA yearbook. Visit verynice’s website to learn about more of the work Matt and his team are doing.