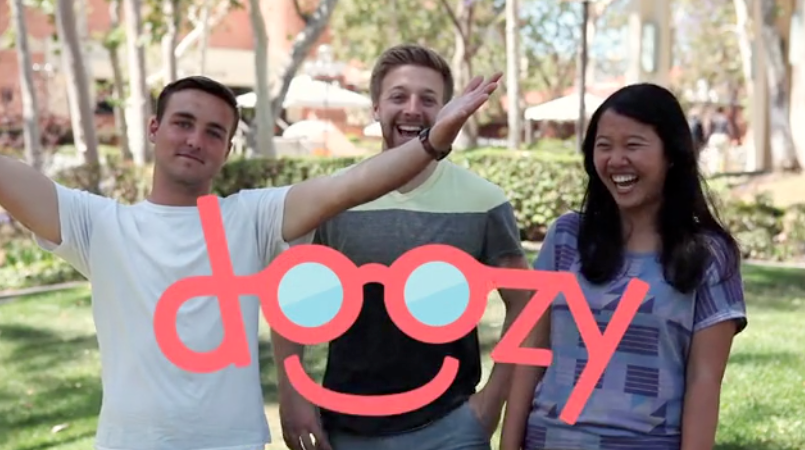 Scott (center) and his co-founders met in a social design class at USC. They liked their assignment so much, they decided to stick with it post-grad.

Whether in art, business, engineering, or another major many students worked on a project at some point in college that seemed worth pursuing. Maybe you developed a particularly compelling product concept, or maybe it’s a large-scale art project, or even a new restaurant idea. But how do you go from “that’s an interesting idea” to actually making it happen? I’m not an expert, but it’s what my team and I are in the process of doing right now by launching a life-size board game called Doozy. Here is what we’ve learned:

Talk About It
A lot of people are afraid that someone will steal their idea or (worse) laugh at it. They might do one or both, but no matter what, you already have X semesters of a head start and hopefully some assurance of the concept’s potential. The more that I’ve talked about Doozy, the more positive connections I’ve made for everything from simply supporters to professional advisors. And as I have spent more time perfecting my story, I’ve seen greater results. Be honest about the stage your company is in, remember to keep people updated, and welcome feedback. Don’t shove your idea down every person’s throat that you meet, but be confident it’s worth sharing.

Create an Asset Map
What kinds of services does your university share with their alumni? Who do your parents know? Where did the person you met at that one conference work again? It’s helpful to sit down and create an asset map for yourself and your team. Think about all of the people and resources you have access to and it will help inform your strategy for next steps. As we’ve prepared to crowdfund we’ve had to be intentional about knowing where our networks overlap, what sectors we’re missing, and which relationships are strongest. If you are consistent with #1 this pool of human capital will continue to grow, and the map can also help with #3.

Build a Mentor Network
I’ll be the first to admit that when I graduated college I didn’t (and still don’t) know much in the grand scheme of things. Stay connected with your professors and advisors from the university, and seek out professionals in the field as well—even if you already graduated, you can still get free advice. For example, we participated in the social innovation incubator program at verynice, received strong support from the USC Brittingham Social Enterprise Lab, and have connected with manufacturing experts to help figure out how to build and ship at least 500 units of physical product.

Doozy is committed to facilitating human to human interaction and free play in a technology-free environment.

Give Yourself Time
I think one of the hardest parts of making your project real is time management in conjunction with job applications, your day job, and other competing priorities (i.e. social life). You have to give yourself dedicated time and milestones on a weekly basis in order to continue moving forward, always keeping the bigger picture and vision in mind. For instance, we’ve known that we wanted to launch a crowdfunding campaign for months, but our release has been dependent on a schedule that aligns with our capacity and desire to feel as comfortable and confident as possible. In our case, that meant giving ourselves enough lead time to connect with the right organizations, customers, and manufacturers as well as solidify our brand image and messaging.

Dream Realistically
Ours is a generation of dreamers, each with seemingly grander ideas than our friends and peers. That said, you must make a concerted effort to ground aspirations in reality. Yes, one day we imagine Doozy produced by the thousands and played in every classroom, office, and park but over the past year we’ve had to ask ourselves some tough questions. Can this game initially be made by hand? Is it necessary to have a dedicated knowledge-sharing platform before we launch? Reduce your project to its most basic form and function, then build from there in response to the market.

The above is by no means an exhaustive list, but take it from someone jumping the hurdles right now and choose two of these points as action steps, whether to try for the first time or simply put more time into. Ultimately, what’s most important is to be clear about your vision and keep moving towards it. And please, if there’s anything you would add let me know in the comments— we can use all the help we can get!

Scott is the Co-Founder and CEO of Doozy, which was incubated at verynice design studio located in Hub LA. He graduated from USC in 2013 and is presently the Partnerships Manager for Ashoka U in Washington, DC. You can help Scott take Doozy to the major leagues by contributing to their crowdfunding campaign, which will launch next week on August 6. Get notified when they launch their campaign.