It’s pro bono week right now, and if anyone knows a thing or two about doing work for free, it’s Matthew Manos, Founder and Managing Partner of verynice. Verynice is a design, branding, and innovation consultancy that, through its unique business model, dedicates 50% of its efforts pro bono to nonprofits. In the past year, verynice has expanded to three offices across the country, including one at Hub LA, one in New York, and one in Austin, TX. The company is on track to donate $10 million in pro bono efforts. 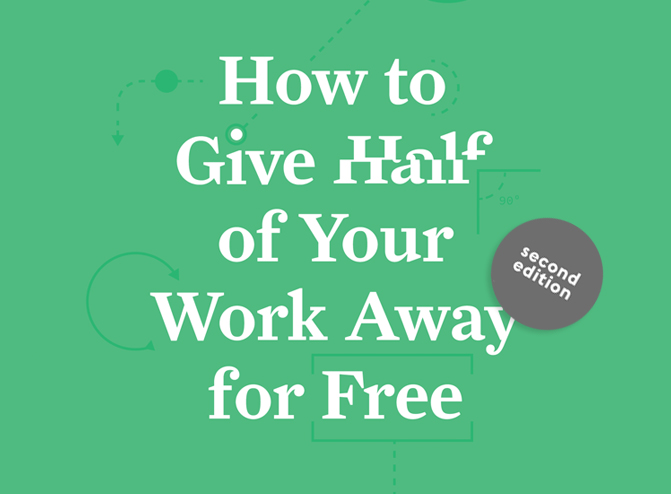 You’ve toured all over the country for the first edition of your book, How to Give Half Your Work Away for Free. What are some of the stories or responses you’ve heard from people, whether they’ve given half, are the beneficiaries of the model, or are just curious? How did that inform your choices for this edition of the book?
The growth and success of verynice as a company has always been thanks to its willingness to share and collaborate. The approach to writing “How to Give Half of Your Work Away for Free”, and growing the subsequent #givehalf movement is absolutely the same. For the first book, much of the content was actually derived through candid conversations with others who were facing a wall in their pro-bono projects as well as businesses who were interested in giving half, or giving any, but didn’t know the best way to go about it. With this second edition, those stories have grown exponentially, and I’m really excited to have been able to collect hundreds of perspectives, concerns, and critiques which directly informed the new content. I’ve always seen business books as being limited in that they come from only one voice – my goal from this book, thanks to having been so fortunate to have a platform to share, is to broaden that voice even more in the interest of growing the pro-bono marketplace.

I’m sure you’re used to seeing many furrowed brows and quizzical looks from people when they see the title of your book. How do you tell the story of the give half business model?
If you want to give half of your work away for free, but do just as well as the guy who doesn’t give half of their work away for free, you have to do twice the work. Volume is what creates balance. Volume, though, can also create insanity. I admit that verynice is kind of insane, but we are also smart! The realization of the importance of volume for our work is exactly what lead to the optimization of our model, specifically the development of a network of volunteers and contractors (which we are now calling the #beverynice network) to help us on a per-project basis to execute our work. It’s what you could call a “social production” model.

I have also found that the best way to get nay-sayers to stop getting so hung up on the “why” is to get straight to business and explain the incentives of pro-bono work. Pro-bono work is your best work as a creative person. There is very little creative restriction which leads to experimentation and innovation. Pro-bono work can lead to incredible networking opportunities. In fact, the majority of our paid clientele is actually derived from word-of-mouth that was initiated by a pro-bono benefactor.

You can’t judge it ’till you try it, right?

What are some of the features of the new edition?
First, we have expanded the FAQ section to house roughly 25 new questions and answers. Second, we have also added a section filled with activities and worksheets to help make pro-bono work easier. Third, we have invited a series of co-authors to contribute alternative perspectives on the field and practices of pro-bono which has broadened our voice for the better.

What has been a surprising or interesting lesson you’ve learned since you first published the book? A few months ago, you wrote a guide for people looking to self-publish. What would you add or take off of that list?
Honestly I told my self I would never self-publish again, but damnit we did it again!! This time around, I still have all of teh same lessons learned, but the major realization was that a self-published author can REALLY thrive on the welcoming of additional voices and authors. Adding essays by others, and not just highlighting my own thoughts really pushed this to the next level and also made the entire process of making this much more fun.

What is your favorite resource – blog, book, website, app, etc – that you use regularly (like, daily) that has helped you grow and sustain verynice?
I am so stubborn when it comes to apps and resources. I seriously use an excel sheet for everything. If I had to pick one thing, though, I would say it is any and all google products - I know that is a boring answer, but I love them. The book was actually edited over google docs and it made life amazing. Also a moleskine notebook. I go through one a month.

Read How to Give Half Your Work Away for Free.
Learn more about verynice.